“WOW did I really get into this book! It was everything I could have asked for in a sequel to Training Season. It was full of DRAMA and lots of kinky sex and fabulously flamboyant Matty and stern-but-kind-of-falling-apart-but-still-hot Rob and once again it’s like Leta Blake read my mind. Throughout all the highs and lows they always knew they loved each other and it was a beautiful thing to see.

Can I just mention how Leta B. always seems to manage to get the right amount of drama in a book without going over the top? Or maybe she did go over the top in this one, but it’s MATTY people! He’s supposed to be over the top. I love it!

I’m trying to remember if I disliked anything about this book, but I can honestly say that I can’t think of anything. It had just the right amount of everything that I like in an M/M Romance book, ESPECIALLY a Matty.” 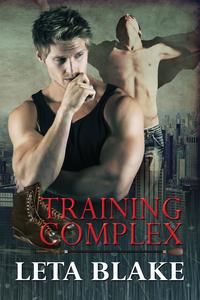 Buckle up – Matty’s back!

After Rob sold his ranch and Matty hung up his skates, they started a new life together in New York City. Now Matty has taken on a fresh challenge as a figure skating coach, and Rob’s second career as a physical therapist should be everything he’s dreamed of. But in the brutal heat of their third summer in the city, Rob yearns for the wide-open country, and the intensity of city life awakens Matty’s demons.

Their love is deep, but Rob will have to admit the truth about what he really wants before they both tumble into chaos.

Click for reviews and praise for Training Complex!
Buy at Amazon

Buy at All Romance Ebooks