Authors, please think back to your first finished novel and how you felt when you sent it out to editors/readers and got back criticism. Can you describe your feelings below a little? In detail? I need someone to understand that no, she’s not a shitty writer, and no, she didn’t waste time on this book, and yes, all authors feel like this. Hell, talk about the way you felt the last time you got those edits back and the pages were all red no matter which book it was for. Go for it. Then talk about how you moved through it, please? Thank you! (This message brought to you by Leta, the cruelest beta reader in the world. :P)

Now…off to my in-laws’ for the in-law Christmas. 🙂 Happy Holidays!

In a book where sexual activities promoted and illustrated character growth and, ultimately, the denouement of the character arc, it was imperative that I “stick the landing” for the final, reunion sex scene. The trouble was…that didn’t come easily.

In the first draft of the book,the reunion sex scene was pretty much just a complete fade-to-black. I wanted something warm and intimate, something loving and gentle, and the characters weren’t interested in showing it to me. It was baffling. They’d shown me everything under the sun up until that moment, why were they holding back now?

I hoped that maybe the reunion sex wasn’t really necessary. Maybe that was why they weren’t showing it to me, because no one needed to see it. I sent it off to my beta readers and, without fail, all of them commented that, hey, we really need to see this reunion sex.

So, I sat down and forced my way through it. I wrote and wrote and wrote. The characters just wouldn’t behave, though. They laughed, they joked, they didn’t have hot sex, instead they just had weird-but-okay sex. I’m going to post that sex below because I thought it might be funny or of interest to some people to see the original scene. So, look for it behind the cut.

I sent it off to my chief beta reader, Jed, thinking, “Well, I tried my damnedest and maybe this is okay.”

No. It wasn’t okay. It was just wrong and off and not hot.

So, I sat down again and I asked myself “Where’s the lie in this scene?” Because I read somewhere some pretty great advice by some author–and how horrible is it that I’ve forgotten who said it or where I read this advice?–that if you’re stalled in a book or scene, it’s because you’re making the characters tell a lie.

I went back over the scene and asked myself, “What’s the genuine response of Rob to this situation? What’s he been like in the past when confronted with this kind of behavior/frustration from Matty?” And I realized, yes, I’d been making them lie about their reunion sex–that was why it’d felt so off and false.

That realization meant I had to go back up into the story and change some other key issues so that the activities could take place as they needed to. Then I re-wrote it and all the beta readers agreed, “Yes, this is what happened. Of course it is.”

I’ll let you buy the book to discover what the reunion sex ended up looking like, but for now, as promised, here’s the lie version behind the cut. 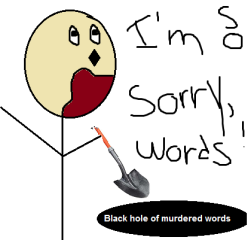 MASSIVE SPOILERS FOR THE END OF CERTAIN STORY LINES WITHIN TRAINING SEASON ARE REVEALED IN THE FOLLOWING CUT SCENE!