“I have a list of hopelessly romantic authors…and Leta Blake just made the cut. There is tension, drama, misunderstanding and hope, all the things I like in my HEAs.Highly recommend.”

Initial reviews for The River Leith are looking pretty good!

“I cannot even begin to express just how much I loved The River Leith. I tore through the book in a few hours because it captured me from the first page and did not let me go.” – Erika, Goodreads

And now it’s available for purchase at Barnes & Noble as well!

“I absolutely adored this book! Definitely one of my favourite ‘feel good’ books. Ever!! It was perfect. Just perfect!”

“Beyond the MC’s are some wonderful side characters! Sooooo many great characters!”

“The descriptive writing is so beautiful too – I hate when authors are so heavy handed and verbose that I zone out – Leta Blake got the balance just right.”

Read more of Barb’s review at Live Your Life, Buy the Book’s Site:

Keira and I are giving away ALL THREE of our fairy tales over at Long and Short Reviews as part of their Winter Blogfest! So, hop on over there for your chance to win the three hot, sexy, magical tales below! And, like the banner says, there’s going to be a prize on every post until December 27, so click around at the Long and Short Reviews site to see what all you might have a chance to win!

Now…off to my in-laws’ for the in-law Christmas. 🙂 Happy Holidays!

So excited to say that another preliminary review has come in on Training Season! Again, I’m so happy that the book has struck a chord with the folks who have received ARCs so far.

(Full disclosure, I received this book as an ARC.)

Normally this isn’t a book I would pick up. I mean I’m all for gay romance, but ice skating isn’t really my thing (I lean more toward like Regency romance and science fiction). However Blake skillfully writes such realistic, complete, compelling characters that it’s impossible not to get sucked into this story.

The characters here really engage the reader. I’m charmed and delighted by Matty, no small feat because he could clearly be annoying or too over the top campy, but Blake finds just the right middle ground with him, keeps him likable and self reflective even while he’s diva-ish and spectacular. Rob is incredibly delightful, but more impressively Blake masterfully does a true reveal on him, as we discover him entirely through Matty’s eyes. She presents him so well that it’s impossible not to fall in love with him even as we slowly learn all his flaws.

I laughed joyfully at the humor in this book. Much of it was subtle but it really hit the right notes with me. I’m tempted to quote some good bits but I don’t want spoil any of it for anyone. While it was funny it was very emotionally intense. Perhaps because the characters were so well drawn and engrossing, but I felt emotionally wrung out as I went through their trials with them. I should be clear, this is not an easy book, you will love the characters enough to hurt when they hurt and it won’t be easy on either of you. But it is so worth it to have characters so real you want to be down in it with them.

I entirely loved this book, despite my initial misgivings. And I feel like I learned a lot about competitive ice skating, in case I ever need that knowledge (you never know!).

If you like books with fully realized characters and explicit sex then this book is probably for you, even if you think you don’t want to read about ranchers or ice skaters. This isn’t your typical romance, this is a real story about realistic people who have a whole lot of sex and fall in love in very real ways, while they grow and change as people. 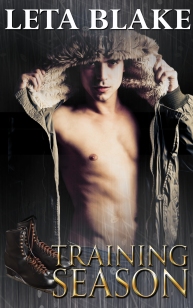 You know what’s really dang hard? Writing a book. You know what’s a hell of a lot harder than that? Writing a friggin’ blurb! I’d like to thank Jed, Keira, and Amelia for their wonderful help on crafting the Training Season blurb. Y’all are the best, and I think you should craft all my blurbs from now on. Especially Jed who did the heavy lifting.

And now for the blurb reveal!

Unquestionably talented figure skater Matty Marcus is willing to sacrifice everything for his Olympic dream, but his lack of discipline cost him the gold once before. Now the pressure’s on. He needs a coach who can keep him in line, but top coaches don’t come cheap, and Matty can’t afford to stay in the game no matter how badly he wants to win.

When a lucrative house-sitting gig brings him to rural Montana, Matty does his best to maintain his training regimen. Local residents turn out to be surprisingly tolerant of his flamboyant style, especially handsome young rancher Rob Lovely, who proves to be much more than a cowboy stereotype. Just as Matty requires a firm hand to perform his best on the ice, Rob shows him how strong he can be when he relinquishes control in the bedroom. With new-found self-assurance, he drives himself harder to go straight to the top.

But competition has a timetable, and to achieve his Olympic dream, Matty will have to join his new coach in New York City, leaving Rob behind. Now he must face the ultimate test. Has he truly learned how to win—on and off the ice—during his training season?

I’m excited to reveal the cover for my upcoming book, Training Season. The cover was completed by Dar Albert of Wicked Smart Designs and I’m wickedly pleased with it.

The release date will be announced soon, just as soon as I have all my ducks in a row. But, psst, rumor has it that it will be December 7. Keep an eye out for that. 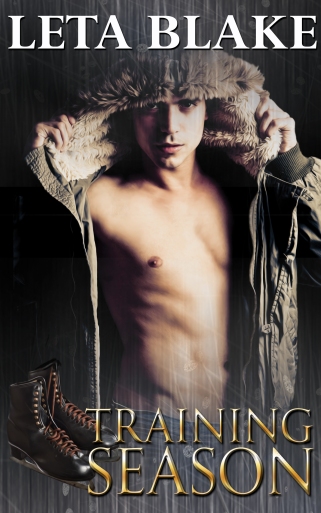 Apparently USA Today is hosting a blog called Happily Ever After and Love’s Nest was featured as a new release. They didn’t provide a buy link, so allow me to provide it for you now!

It might be an associated blog, and it might not be a review, and it might be that many other releases were also featured, but, dude, I’m still excited. *twirl* So, yay! That was super cool! I’ll definitely take it and call it a win.

In other news, this weekend was eaten up by swim team and that’s that. I am making progress on ’90s Coming of Age Novel. I’ve also determined how I want to release it and that has freed me up emotionally to start getting excited about it. Of course, it’s probably another nine months from a release, but slow progress is still progress.

I always look like a woman about to run a bunch of miles in the early morning sun when I’m writing. I’m just that determined and eager and open to the plodding step-by-step that it will take to progress from here to there, and open to the beauty that can be absorbed with each stride forward, too. Okay, so not always, but on a good day, for sure.